It is a familiar retort by anti-Trump forces “He’s racist!” 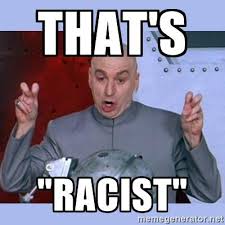 The mainstream media has convinced many of this narrative.

The most recent example of this was after the events in Charlottesville.  Donald Trump condemned ANTIFA, the KKK and neo-Nazi’s.  But the media twisted that to say that Trump is secretly a Nazi. Accusing people of racism is the media’s favorite card to play. Some people are swayed by it.  I’ve often asked people “why do you say he’s a racist?”

Some of the responses I have received:
1. Most common: “Because the KKK endorsed him.”
Ok, I saw a video of the KKK endorsing Hillary, but let’s assume some KKK members did endorse Trump. Are you defined by who supports you? There was a Satanist rally that supported Hillary. So is she a Satanist? Most Islamic extremists supported Hillary. So she a terrorist?  Communists supported Hillary.  Does that mean she’s a communist?
No, because you are not defined by the people who support you. Trump or Hillary has no control over that.
2. Second most common: “Because he said all Mexicans are rapists.” He did not say all Mexicans are rapists. He said that rapists are coming into America from Mexico. The context of what he was referring to was a report that said 80% of women traveling through Mexico to cross the US border are raped. They aren’t being raped by ghosts. Trump is quite right to say that rapists are coming in from Mexico. It is not racist to point out the facts, despite what the politically correct people say. 3. Some people have referenced a housing discrimination case brought against one of Trump’s apartment buildings in the 1970’s.  Trump’s business settled out of court with the government with no admission of wrongdoing.
Let’s assume that even though Trump’s organization did not admit wrongdoing, let’s say they did discriminate.
Some context to the case:  The government brought similar cases against many landlords at the time, this was not uncommon.  Also at the time, it was true that renting apartments to black people lowered occupancy rates, rents and overall value of a property.  So the property manager of one of Trump’s buildings didn’t want lower rents, decreased property value and decreased profit?  Is that news?   Could the motivation be monetary and not hatred of black people?
Consider in the 90’s Trump owned a semi-professional football team.  Mostly all of the players were black.  Was that discrimination against white, Mexican and Asians?  No.  His motivation was again, to advance business interests and not a KKK agenda.

4.  Some people say he’s racist because he has proposed Muslim bans or Muslim extreme vetting.  First, Muslim is not a race.  When someone claims this is racism, that person is not showing respect for words or truth.
Many countries have either taken steps to vet terrorism and/or have put limits on Muslims immigrating into their countries.  For the purposes of safety.  One might disagree with Trump’s immigration ideas, but to claim his motivation is anything other than safety is quite silly.
5.  Because Trump wants a border wall or deportations.  Again, many countries have border walls and immigration enforcement.  Mexico strictly enforces immigration policy against its southern border Guatemala.
Why are they not labeled racist?  The United States takes in more legal immigrants by far than any other country, yet we are labeled racist for wanting a border and immigration enforcement?  It’s silliness. 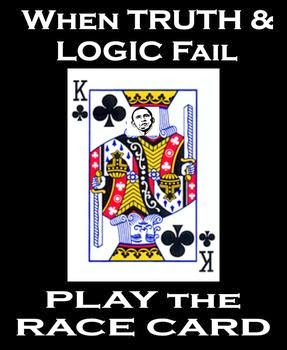 But as with most things, when the media has no argument, they play the race card.  To scare minorities towards their position and guilt white people into their position for fear of being called racist.

If you’re reading this, here is the bridge out:

– I thought Trump was racist.
– I see now there is no evidence that he is racist.
– Remember who told you Trump was racist.
– Knock the credibility of those media outlet’s down a few pegs.
– Understand that taking those media outlets word for something didn’t work.
– In the future, require evidence and reasoning before accepting something as true.
– Because the media is almost completely one-sided against Trump.  And as this example shows, they are willing to lie to you.