Direct to the People:  Hello Mr. Clapper, you just won Most Guilty-Looking Man Alive for the 5th straight year.  Should I say congratulations?

Clapper:  Thank you.  This didn’t just happen.  I’ve worked at it. I’d like to attribute this award to all the bad things I’ve done.  They really eat away at me.  And that obviously shows through.

DTTP:  Yes let’s talk about that.  If you were to play poker…

Clapper:  I know where you’re going with this… I never play.  I always lose!  Unless I cheat.  But then I feel guilty about it, causing guilt to show even more on my face.  It’s a vicious cycle.

DTTP:  Very interesting.  Let’s get down to the nitty-gritty here, the mechanics of your guilty looking face:  I’ve noticed one of your trademark guilty looks is the mouth upwards.  Your “blue steel” if you will.  Can you talk a little about that? DTTP:  Yes, everyone knows that Mr. Clapper, that’s cute you think anyone doesn’t know.  What about your eyes.  I often see you using the playing dumb eyes.  As if you’re a bewildered old man who forgot to take his meds. 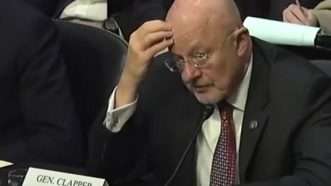 DTTP:  But you’re not THAT old.  Is that why it comes off so guilty?

Clapper:  I suppose, maybe I should try that look in 20 years huh?  (chuckles and looks around)

DTTP:  yes and not right after or before a look like this: Clapper:  To your first point, I do know everything that is happening.  I was the Director of National Intelligence.  So when I play dumb, it’s a front.  To lie convincingly, people have to delude themselves.  They have to believe the lies.

DTTP:  And so your refusal to internally believe lies is what causes the MASSIVE tells shown all over your face? Clapper:  Yes you got it.

DTTP:  Is that why someone like someone like John Brennan can come off better than you, even though he’s probably done worse things? Clapper:  Yes, but it’s a little deeper than that.  He and people like Jim Comey have bought into the idea the are doing unethical things for a greater good.  Brennan’s a Muslim fanatic who thinks he’s serving Allah.  Comey has decided that the deep state being in control is preferable to unpredictable freedom.  They both know they when they are lying, they’re not crazy.  But their guilt is mitigated because they think they are lying for a greater good.

DTTP:  And you don’t think you have been unethical for a greater good?

Clapper:  No!  That’s why I win this award every year! I’m massively conflicted on the inside.

DTTP:  Have you ever considered coming clean?  Turning informant?

Clapper:  That would be very difficult.  I’ve done a lot of bad stuff.  And what’s more, I’ve witnessed a lot of bad things and didn’t speak up

DTTP:  Those things may be exposed anyways.  You could go down as a hero. DTTP: Might as well do the right thing now while you can.  This is still you somewhere inside: This article was satire, this was not a real interview with James Clapper.  But I do hope he comes clean.