At the White House press conference Thursday, CNN correspondent Jim Acosta asked President Trump “you said that ‘the leaks are real but the news is fake’.  I don’t understand it seems like there is a disconnect there.  If the information coming from those leaks are real, how can the news be fake?”

This is a great question.  Allow me to demonstrate:

True facts are used all the time to support fake news.

For example:  A football player may have a great game.  They caught 10 passes.  Scored 2 touchdowns.  Star of the game.

Now what if the sportswriter covering the team wrote that the player was the best wide receiver in the league?  Would that be true?

Not necessarily.  Maybe that was a fluke game for the wide receiver and he hadn’t scored a touchdown all year.  What about all the other wide receivers in the league, maybe they have had much better seasons than this particular receiver.

So people say this sportswriter is stupid and terrible for his opinion and the sportswriter says “how can you say my report was wrong?  I just reported the true facts about player’s performance in the game.”

It’s a slight of hand.  I don’t even know if they realize they are doing it.  Doesn’t matter.

The point is when the end result is an inaccurate message?  Then that is fake news.  Even if some of the facts of the story are true.  It is a half-truth.  Which is the most deceptive kind of lie.

CNN did it with the Michael Flynn story.

Short summary of the Michael Flynn story for review:  Michael Flynn was the National Security Advisor to Donald Trump.  Michael Flynn apparently discussed sanctions with Russia before President Trump was in office.  This doesn’t appear to even be illegal.  Charles Krauthammer said “it sounded very odd and non-scandalous.  If …the national security advisor, the guy who’s coming in, 3 weeks before he comes into office, let’s say he did discuss sanctions.  So what?  Let’s say the worst case scenario, he gives him a heads up that the Trump administration will undo the sanctions, which in fact the Trump administration hasn’t done, so what with that? … He knows it’s a perfectly normal thing.”  It was not illegal activity.  The point of contention seems to be that Michael Flynn did not inform Vice President Pence of the conversation.  Or something.  And Trump or his team didn’t like that.  Michael Flynn said he didn’t purposely withhold information, he just forgot.  But the Trump admin decided that whether it was dishonesty or a mistake in memory, Michael Flynn had to go.  So that’s it.  It’s sort of much ado about nothing.

But here is how CNN characterized it:   “The sudden exit (of Flynn) marks the most public display yet of disarray at the highest levels of the new administration, which has faced repeated questions over a slew of controversies and reports of infighting among senior aides during its first three weeks.”

1.  It’s “disarray” at the white house.  Ok, a guy messed up and got fired.  And?  Happens in every admin.  Further one could argue that it’s a sign of a tight ship.  Trump’s not putting up with lying or incompetence.

Now consider the bigger context.  Under Obama, the then Ambassador to the United Nations Susan Rice lied to the entire country.  She advanced a false narrative about what happened in Bengazi.  Blaming the attack on an internet video.  E-mails uncovered in the subsequent investigation found that the Obama admin fabricated this narrative and Susan Rice knew it.  She told bold-faced lies on 5 different Sunday news shows.She was never fired.  In fact she was promoted to the job of National Security Advisor.  The same post Michael Flynn had!

Did CNN characterize this as “disarray”?  Even though State Department officials were upset about Susan Rice’s false claims?  Of course not.

But the leaks about Michael Flynn talking to Russia are true. Right?  So does that make double-standards ok?  No.

2.  “which has faced repeated questions over a slew of controversies”

What a circular logic sink hole that is!  First, the Flynn situation is only controversial because the media spun it that way.  They create hysteria by blowing things out of proportion.  That is fake news.

One commenter on my page put it this way:

“the right made such a big deal about Hillary’s emails when their pick’s cabinet is doing FAR worse.”

This is why fake news is harmful.  It deceives people into faulty narratives like that.  What Hillary Clinton did with her e-mails was a felony.  She put national security secrets in jeopardy.  An Iranian nuclear spy was executed possibly because of Hillary’s hacked e-mails that contained information about this spy.  Other top-secret information was also exposed.  The FBI said that likely 5 different countries hacked her server.   Putting national security interests in jeopardy.

But according to that poster, that isn’t as bad as Michael Flynn…. who didn’t do anything illegal.  All he did was either forget something or lie to the vice president.  For which he was fired.  I cannot find any negative effects this might have had on our country.

That poster is not abnormal.  Many people don’t use critical thinking skills and good reasoning to discern the importance of different information.  They listen to hysteria.  They assume “oh, the media seems to be upset about this, must be a big story.”    Then with Hillary’s e-mails, “hmmm, they don’t seem to think it’s a big deal, so it must not be important.”

Which led this person to think the Flynn situation is “FAR” worse than the Hillary e-mail scandal.  Double-standards in coverage leaving people with false impressions. Fake news.

It’s similar to the recent ICE raids targeting illegal alien criminals.  There was much controversy and protests about them.  However, when Obama did the same thing, there was no controversy.  Why?  Because the media is playing up narratives under Trump that they didn’t under Obama.  Some in the public are manipulated by it.

3.  “which has faced repeated questions over a slew of controversies”

Complete fabrication.  Step 1:  Ask repeated questions.  Step 2:  Refer back to the asking of questions as proof there is disarray and controversy.

Self-fulfilling prophesies based on nothing.  It would only mean something if the organizations asking the questions were credible and unbiased.  And even then it wouldn’t mean much.  It would only be a clue that something might be wrong and to dig deeper.  But it is not proof in itself.  Circular logic.

4.   “reports of infighting among senior aides during its first three weeks”

And “Melania Trump not happy as first lady”.  “Kelly Anne Conway stabs Sean Spicer in the back”.  These are not stories, they are hearsay and gossip magazine material.  Which is kind of like fake news.  Not reports, rumors.  But worse is that CNN and most of the other fake news media did not do these extreme reaches to fabricate negative narratives against Obama.

“But the leaks showing Michael Flynn talking to Russia about sanctions are true, so how can you say it’s fake news?”

See how much fake news mileage can be gained from one true fact?

Or just repeat media narratives like that same poster:  “trumps administration come apart at the seams after only three weeks” 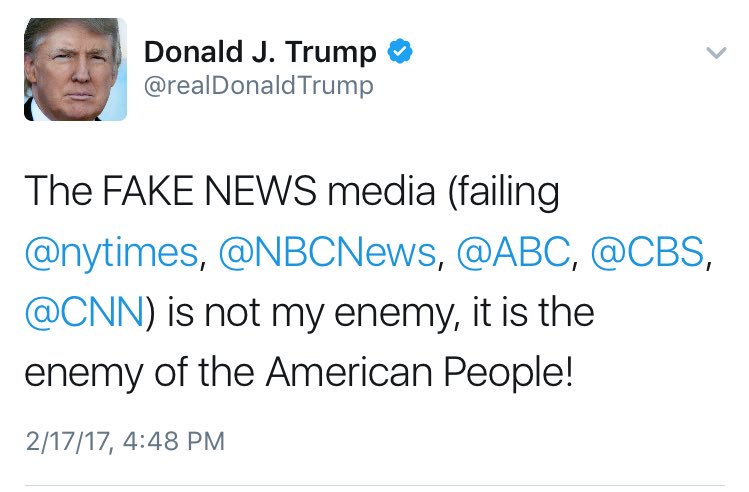