In the aftermath of the Charlottesville melee, Donald Trump said:

A reporter asked him “Are you putting what you are calling the alt-left and white-supremacists on the same moral plane?”

The media concluded from these statements that Trump was making a moral equivalency between the two groups and that Trump is a secret Nazi. Trump was like a parent who breaks up a fight between two kids.  One child says  “He took my toy!”  The other child says “He hit me!”  The parent says “You’re both wrong, go to your rooms.”  By saying that, is the parent saying that taking a toy is just as bad as punching someone?  No.  Is the parent secretly in favor of stealing toys because they condemned both stealing and punching?  Of course not.

It’s dumb analysis by the media as they are prone to do.  The media are so skewed anti-Trump,  they make anything mean anything. Also wrong is the media’s implication that ANTIFA is not as bad as Nazi’s or the KKK.  ANTIFA is much worse!  It’s not even close.

The “Nazi’s” at the UnitetheRight event are none of those things.

The similarities between Hitler’s Nazi’s and Nazi’s at UniteTheRight are:

A. Dislike of a specific races.

Look at this sign from the Boston rally counter-protest a week after Charlottesville: 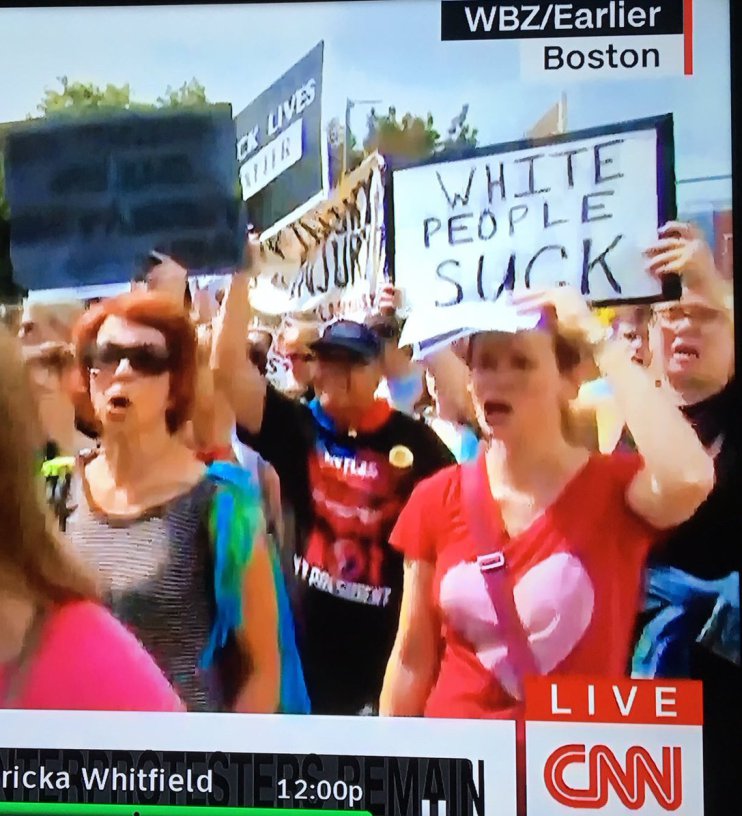 Why is it ok for her to say “White people suck”, but not ok for a self-identified “Nazi” to say “Jews suck”, or “Black people suck”?

Either all are ok or none are ok.  Having a double-standard is treating people differently because of race.   That is racism.

Japan and China already have that.  How come they aren’t called racist?  Why is it ok for Asians to do that, but not whites?  Double-standard – treating different races differently – anti-white racism.

it’s not just some people at UniteTheRight who want to be with people who are similar to themselves, black people at Evergreen college expressed similar desires when they called for a “day of absence” excluding white people from campus for a specific time.  Black people do this when they go to all-black colleges.  Every race does this, there are any number of ethnically un-diverse organizations specific to certain races.

Is the KKK the same today as it once was?

They too likely want an ethno-state which was covered above.

Historically the KKK has been involved with lynchings or hangings. I’ve never heard of that happening today.  Except for ANTIFA lynching Trump supporters.

It is possible the KKK or Nazi’s do want violence, which would be wrong.  But for whatever reason, they aren’t doing it.   Maybe because their numbers are so small.  Which leads to the next reason why ANTIFA is much worse than modern-day Nazi’s and the KKK:

2.  Sheer numbers:  ANTIFA and their support system is astronomically larger than that of Nazi’s and the KKK.

The UnitedTheRight meeting had about 500 people at it.  As Trump said, not all of them were Nazi’s or KKK members.  In fact only a small percentage were.  UnitetheRight’s facebook page, which has been taken down now, did a poll asking attendees how they identify politically.  Only 19% identified in a group that included Nazi’s.  That’s less than 100 people.  There were a few sightings of these people in KKK outfits or others making Nazi salutes at the event.

YouTube creator Jason Allsop was an attendee of the event.  He is not a Nazi or KKK member.  He said beforehand that one of the purposes was to hopefully persuade some of the people at the event away from the extremes.

How’d that work out after the left dropped a bomb on the event!  Probably not good!  Hopefully it didn’t push people to be even more extreme. This drastic difference was shown at the Boston free speech rally 1 week after the Charlottesville event.  The free speech rally had only a few dozen attendees in the small building on the right side of the picture below.  None of these people were Nazi’s or KKK members.  Counter-protesters on the other hand numbered upwards of 30,000 people!

30,000 people against free speech, in favor of GMO’s and not in favor of black lives?  That’s weird.

It’s more likely the counterprotesters were ginned up by the media narratives calling this free speech rally a white supremacist rally!

The mayor of Boston characterized the few dozens activists at the free speech rally as bigoted, hateful and intolerant. ANTIFA and other left-wing protesters at the event threw rocks into crowds of police, assaulted people, maced people, bullied Trump supporters to remove their Make America Great hats, burned American flags.  They even dragged an older woman on the ground by her flag.

Where is the condemnation of this behavior from the left?  Hard to find.  Many Democrats approve of this behavior.  Some look the other way.  Some blame Trump or Trump supporters for “inciting” the bad behavior!

I guess it’s also a woman’s fault for being sexually assaulted because she looked too attractive.  I know. Unlike many Democrats who are complicit in left-wing violence, approve of it or fail to condemn it, zero right-wing people approve of Nazi-ism or the KKK.

So ANTIFA and the number of Democrats supporting ANTIFA is tens of millions of people.  KKK and Nazi’s are only a few thousand people in the US.

3.  ANTIFA dramatically violates people’s rights.  Nazi’s and KKK members in America today are not doing that.

The proof is in the pudding.  ANTIFA routinely assaults people and shuts down free speech.  Everywhere they go they do it.  They openly advocate for violence against people who disagree.

Are Nazi’s and KKK members doing that?  I’ve never seen it.  Yes James Alex Fields, the driver of the car who smashed into counter-protesters in Charlottesville did.  However the context is that he was being attacked.  Eye-witnesses say counter-protesters were hitting his car with bricks, rocks, bats and surrounding his car before he sped up.  He did not initiate the conflict.  That doesn’t make it right how he reacted, but if ANTIFA and radical leftists wouldn’t have assaulted people, this likely wouldn’t have happened.  After almost 2 years of unprovoked left-wing violence, someone on the right finally snaps and then the left says “oh see, right-wing violence!” Nazi’s and KKK members may have bigoted views about non-whites, but ANTIFA and many on the left are the ones engaged in bigotry that violates people’s rights and physically assaults people which is much worse.

The people rejected the rampant corruption and globalist message of the media and Democrat overlords.  So now they are resorting to manipulating vulnerable people to be their brownshirts and enforce their newspeak.

Hitler, Goebbels and KKK leaders deceived their followers into thinking that bigoted violence was a noble thing.  Same deception is happening here.

(For anyone who is unaware of violence from the left):

1 thought on “ANTIFA is much worse than Nazi’s and KKK, 3 Reason’s Why”